After discovering the irresistible Hiiragi Kagami by Mama Chapp, it was inevitable that more dolls would follow.  Today, Hirasawa Yui joins the family ^^. 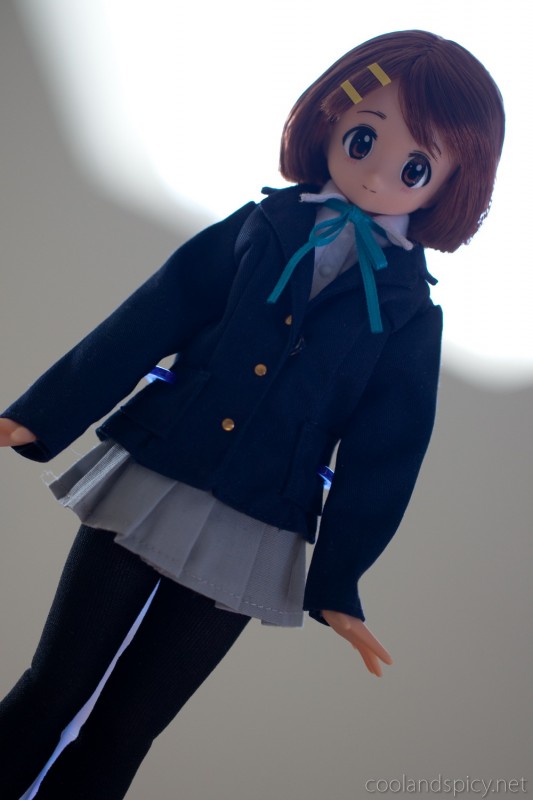 Specifically, Hirasawa Yui from the popular anime series K-ON!.  I don’t think I really need to explain what K-ON! is, right?  Well, I always liked Yui’s super energetic, albeit air-headed personality and when I heard Azone would be making a doll version of her, I couldn’t resist ^^ 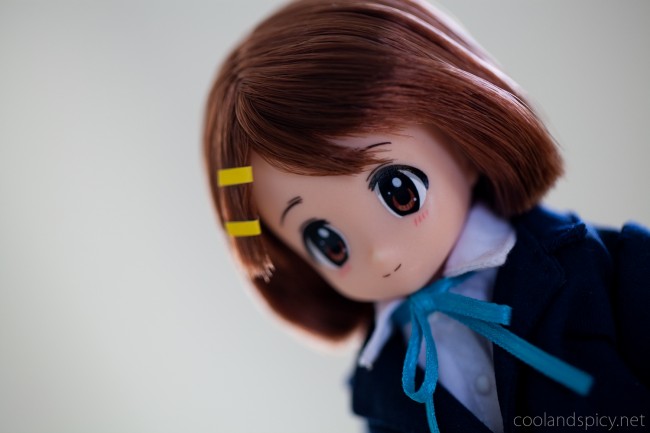 Yui comes dressed in her full school uniform with blazer, shirt, blue ribbon, and pleated skirt.  One thing she did not come with is her distinctive yellow hairpins.  Well, Azone included a piece of paper along with a strip of double-sided tape that was supposed to be used to cut out thin strips of yellow paper to serve as hairpins  These hairpins would then have to be wrapped around a lock of hair.  The problem, however, was that the tape really didn’t stick well and Azone only included a small amount of yellow paper that could be cut into hairpins.  After 30+ minutes of trying to wrap the tiny yellow pieces of paper into hairpins, I got frustrated and just made my own out of some yellow sticker labels (of which I had a near endless supply of).

So the hairpins  you see above are actually my own creation and looking at them more closely in these photos, I might have made them a bit too thick but it was a chore to get them on so I will probably leave them ^^;  Anyway, I blame the hairpin fiasco on poor design by Azone.  Of course, my hands aren’t very adept at working with such small, fragile things… Anyway, was not happy with the hairpins but it is the only major complaint I have with the set ;) 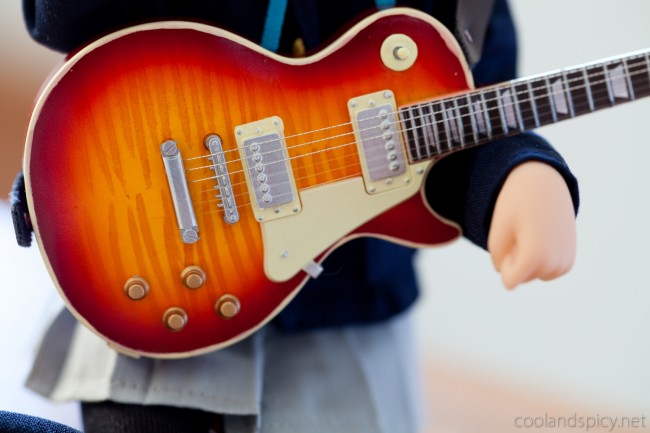 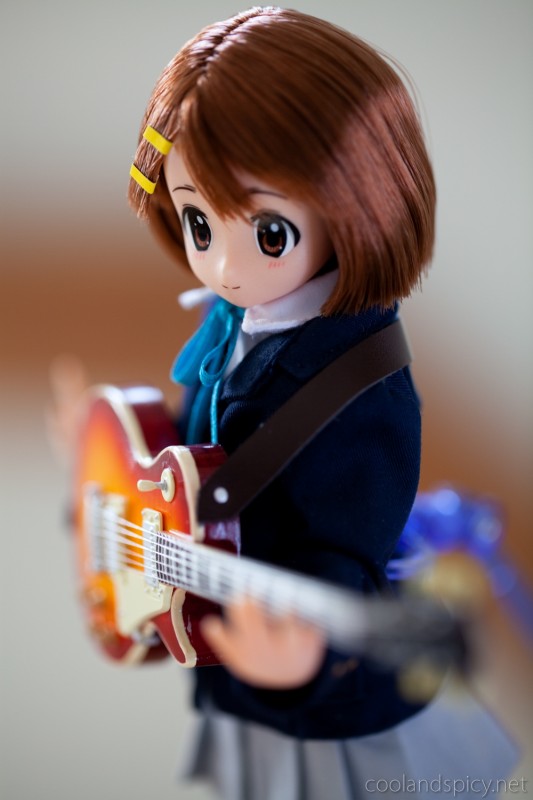 Only problem with Giita was that the switch you see on the top came broken.  At least I think it did ^^;  As soon as I took the guitar out of the package, I saw it floating around on the bottom of the container so maybe I broke it off trying it get it out :o 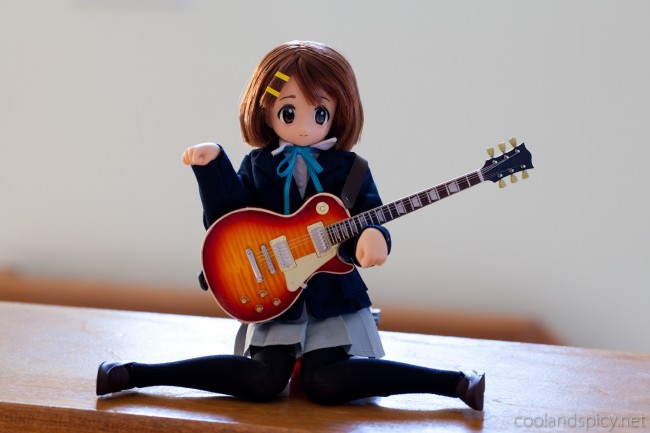 Nya~
Yui had a bit of difficulty with this sitting position.  Her legs only bend so far forward which makes sitting her flat with her legs out a challenge.  Had to prop her up just a bit ^^; 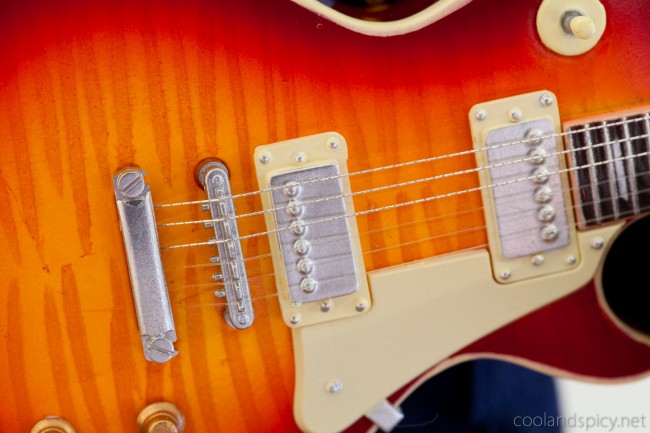 Super close look at Giita.  Not quite perfect but nicely detailed nonetheless.  What I really like is how the guitar’s strings are real!  Yeah, I figured they would be pieces of plastic or paint or something, but they are actually strings that and it almost makes you want to strum them xD 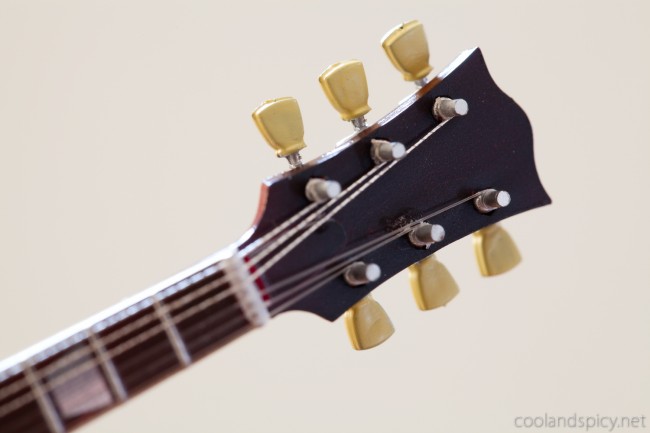 The other side of Giita.  No, I did not attempt to tune it ;) 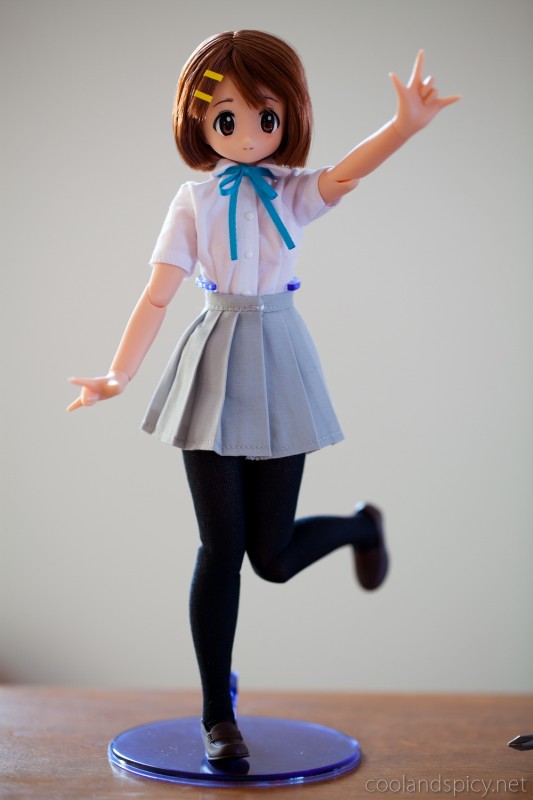 So, what if it’s summer and Yui is getting a bit hot with her blue school blazer?  Well, you can take off her jacket, of course! 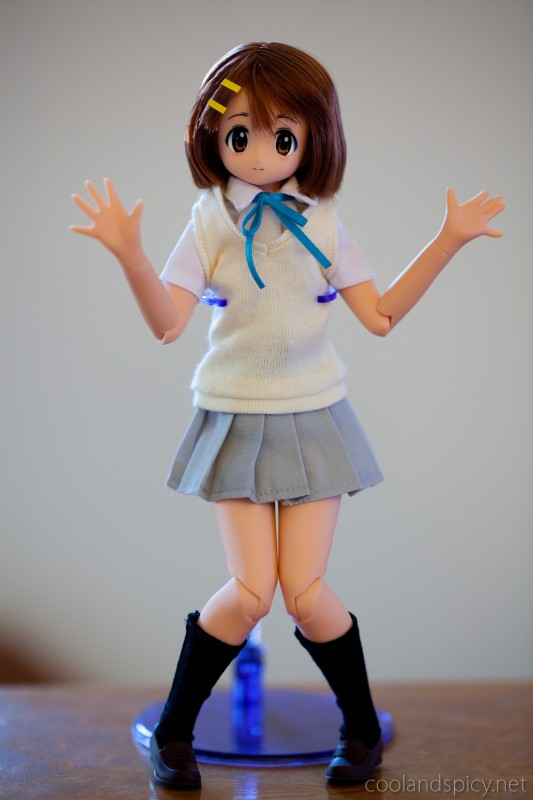 Or, if it’s more to your style, Yui can don her school sweater (or is it a vest? I don’t know these things…). 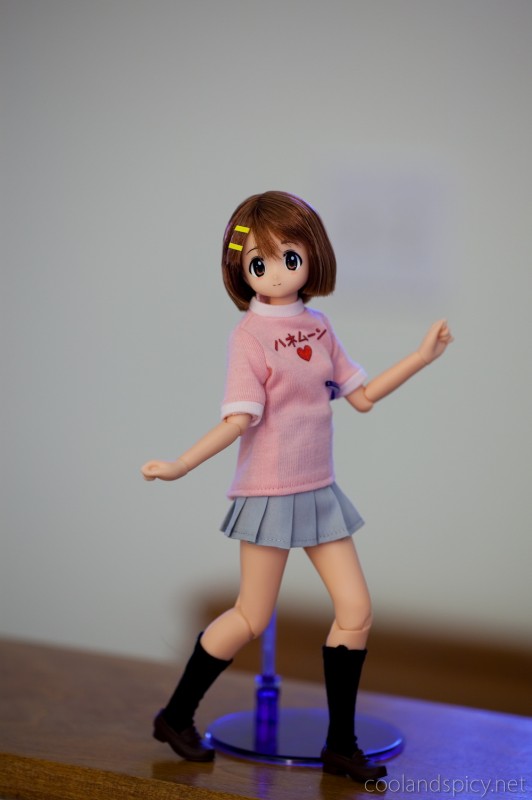 Even more clothing extras!  The final accessory is Yui’s Honeymoon (ハネムーン) T-shirt.  Why “honeymoon”?  I honestly don’t know.  I don’t remember this specific shirt from the anime, but Yui wore a lot of strange shirts so I probably just missed it >_<.  I think there were also some other special editions of Yui from Amazon and another store that had a different shirt in place of this one.  Amazon had one that said “Paradise” but looked pretty similar otherwise.  Ordering from Amazon would have been more expensive so I just got the regular version with the Honeymoon shirt ^^. 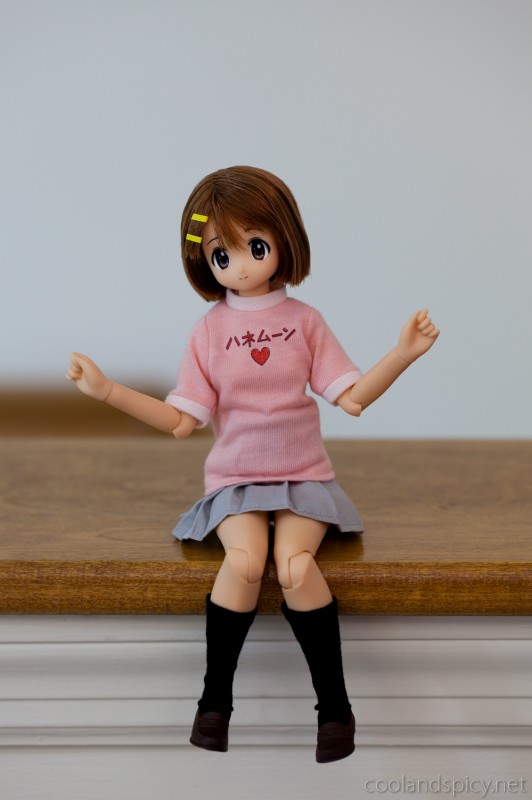 How can anyone resist this cuteness?  Seriously?  Now you see why I had to get Yui.  She’s just too cute :D

And finally, a comparison shot with Mama Chapp Kagami.  You can  probably pick out differences by the photo but I’ll summarize what I found:

Kagami definitely uses a Obitsu type body whereas Yui uses… I have no idea.  It doesn’t match any of the types I saw on Obitsu’s site so maybe it’s custom?  Still a doll noob…
Update: Yui’s body is the Pure Neemo Flection.
Anyway, the end result seems to be that Kagami is more flexible and easier to pose.  For example, Kagami’s legs and knees are able to rotate farther and her arms and hands have more movement range.  Overall, Kagami is more flexible.  The advantage Yui’s slightly less flexible body has is that it looks better ^^;  The joints aren’t so obvious and her body is just shaped more naturally.  Yui has a much harder time standing without external support.  Different shoes may help this though.

A side note is that Yui’s body also seems more accurately proportioned.  Although they are both dolls, Yui looks more realistic to me.  Yui’s head in particular is naturally shaped and proportioned whereas Kagami has more of a anime-ish look.  Yui is also slightly taller.  Both are good, just different ^^

Lastly, and Yui wins here hands down, is the clothing.  Yui’s school uniform is very high quality and fits nice and snug whereas Kagami’s school uniform looks overly large and stiff in comparison.  I really, really like the 3 (partial) outfits that come with Yui.  Definitely a huge plus for me!

So, the final verdict?  I love Yui!

Yui can be found Hobby Search and Amiami although Hobby Search is currently out of stock.  Both are priced around 13,200 yen.  While not cheap, it’s not that much more than some higher priced PVC figures.  Definitely worth it for me ^^ 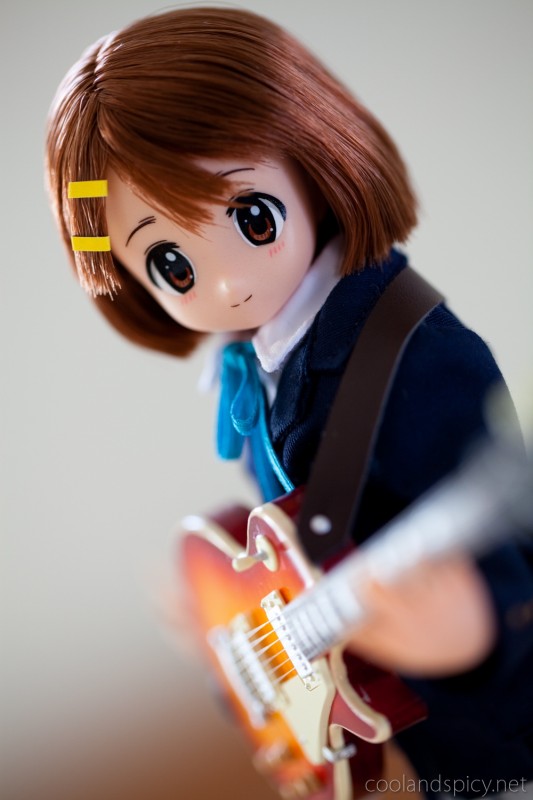 Parting shot of Yui rocking out with Giita!