Well, I’ll say a bit more than that ^^;  This is Hiiragi Kagami as released by the Mama Chapp Toy company in Fall 2008.  When I first read about the Lucky Star dolls, I was very interested but did not follow up due to the difficulty in obtaining them.  Kagami was an limited, exclusive release by MamaChapp and was only available for order through their site.  So, I abandoned the idea of owning this lovely Kagami for nearly a year.

My interest in the Kagami doll never faded entirely though and a few months back I decided to look into it once again.  I saw they were being sold on Yahoo! Japan Auctions but most of the auctions were quite pricey.  I monitored the auctions for a few months and finally spotted a decent deal for a brand new, unopened Kagami doll.  I didn’t hesitate and placed a bid through a deputy service.  The auction final price was 14,500 yen, a bit lower than the original retail price; not cheap but well worth it!  A few weeks later, Kagami was in my hands :D

I have to admit that I’m still a doll n00b and don’t know much about Japanese dolls quite yet.  While it seems Dollfies are becoming more popular, the smaller scale dolls like this Kagami seem a bit more varied.  Lots of different sizes and body types.  Kagami here is a 23cm doll and comes with her red winter school uniform.

Now on to some real photos!  I recommend opening the full versions to get the best look! :)

Taking some inspiration from Chun’s “Taiga goes out” series, I decided to give Kagami a day out as well :)  Let’s see what she decides to do ^^ 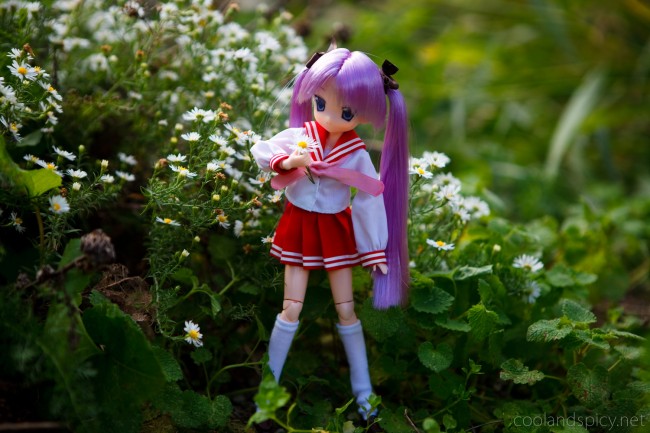 Kagami pics a flower from the garden.

Kagami is made from ABS and PVC materials for the majority of the doll’s body, including the torso and limbs.  The limbs are all jointed as are the torso, shoulders, and feet.  This gives the doll a nice degree of poseability.  The doll’s head and hands are composed of a softer rubber material. 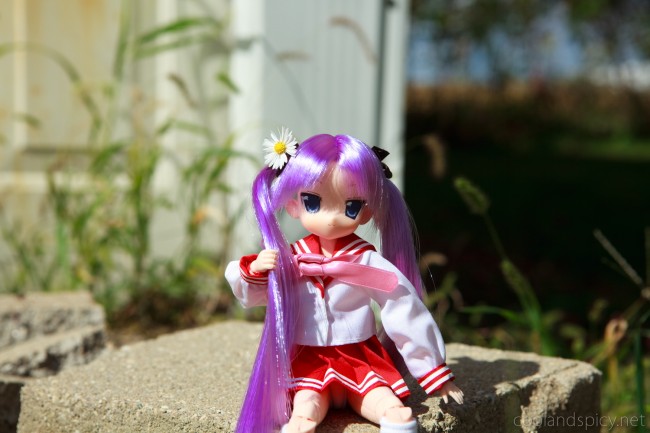 "Wh-What are you looking at? Baka!"

Not quite a Dollfie, but there aren’t any Kagami Dollfies!  I’m also not skilled enough to make my own Kagami Dollfie >_<  Not that I think a Dollfie would necessarily be better than this Kagami anyway ^^. 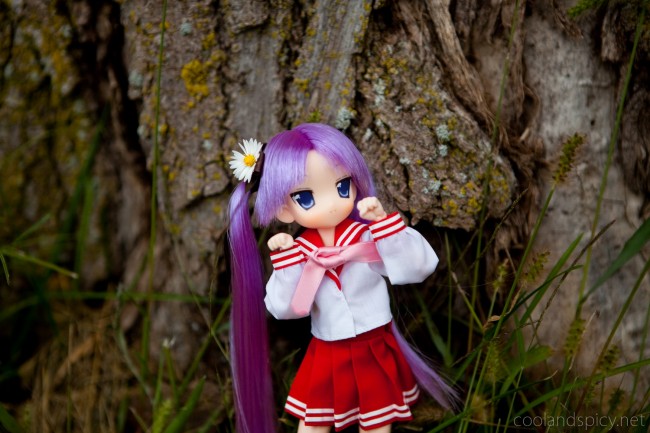 So, how is this Kagami doll?  I have to say that I absolutely love her!  She’s incredibly cute and being able to pose her is great.  I mean, I know Figma can be posed too, but they just seem tacky compared to this. ^^;  I’m beginning to realize why Dollfies have such a dedicated following.  So, yes, I really do like her, but I don’t think I will be dropping figure collecting either.  I do foresee myself cutting down on future figure purchases but definitely not going away.  Still lots of lovely figure ladies that I want to acquire ;) 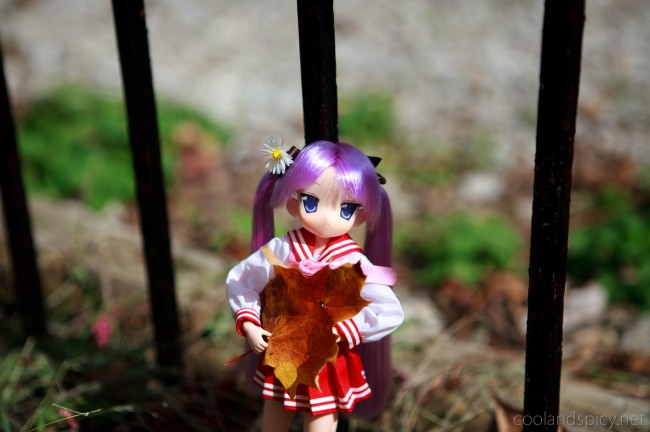 So there you have it.  I do sort of see doll collecting, be it Dollfie or obitsu-type, as the next step beyond figure collecting and I’m glad to have gotten to this point.  I actually had a ton of fun taking these initial photos though I perhaps waited a bit too long on posting them.  I’ve had this Kagami doll for a few months now and you can probably tell by the green foliage that the photos are also a bit old ^^;

Anyway, I hope you enjoyed viewing the pictures as much as I did taking them ^^.  I have more to come in future posts too so be sure to check back soon!