Didn’t plan on spending much in January but still managed to acquire a few items ^^;  Just a quick rundown on the various items I procured. 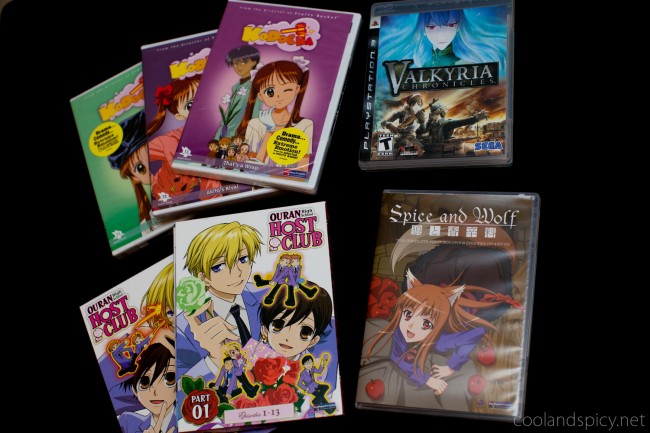 First up is the disc media.  Rightstuf happened to run a sale on Ouran late last month so I picked it up.  Then a few weeks later, they had another sale on Funimation items.  Yeah, I know Funimation doesn’t have the best reputation but I really enjoyed Ouran so figured it would be worth it.  Also, grabbed Spice and Wolf since my interest in the series has been renewed recently (more on that in a bit).  A few Kodocha volumes I needed to complete my collection went along with the order.

Aside from the anime DVDs, also grabbed Valkyria Chronicles for PS3.  I’ve been wanting to play this game since its release and since I spotted it for a mere $20, I went for it.  Not one for JRPGs these days, but I’m liking it so far.  Combat system is a bit quirky at points but it’s fun ^^.  Mass Effect 2 is taking game-time priority though ^^; 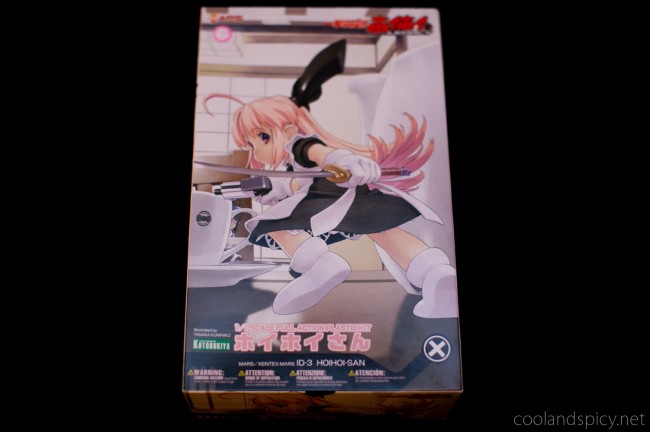 Hoihoi-san is next!  Yeah, I know this is an old release (Fall 2009) but the store I ordered her from was not too reliable and they just this month shipped her out to me…  Probably won’t be ordering there again.  If you’ve never heard of Hoihoi-san, she’s a small robot that is made to exterminate bugs and also to be irresistibly cute xD.  Check out the OVA if you want to see more.  Here, she is a pre-painted model kit so assembly is required but it doesn’t look too hard.  I have not had a chance to put her together yet.  Her miniature rival, Combat-san is also getting the model kit treatment soon!  :D 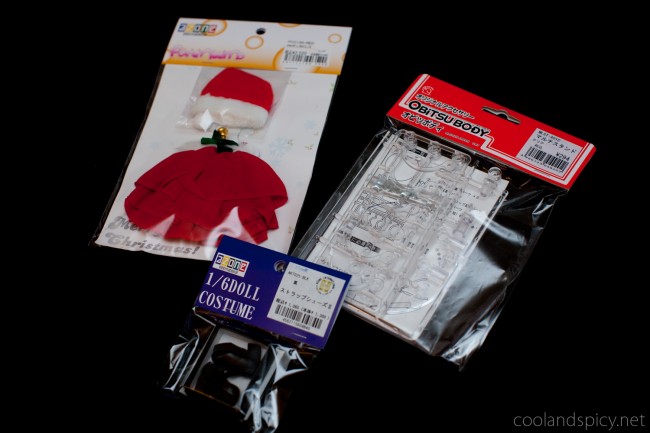 Moving on, I’ve got a few treats for my doll daughters.  The Christmas dress is actually the red version of the one Kagami wore for Christmas.  Hobby Search sent the wrong color by mistake and so they sent out an additional one at no charge.  First time I’ve had a problem with a Hobby Search order and they took care of it nicely.  That means I’ve got two of the outfits for next Christmas ^^.

Also from Hobby Search, I ordered an additional Obitsu Body stand and a pair of 1/6 scale high-heeled strap shoes.  The stand is same type as I used for posing Yui earlier, just clear instead of blue.  It worked really well so I bought another one.  The shoes are actually in anticipation for a new outfit I have ordered for the dolls.  Will have photos of that when it arrives ^^. 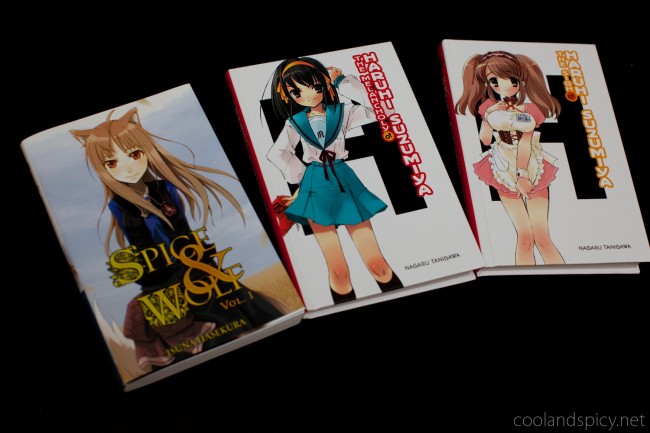 Books!  And they’re not manga either ^^;  Decided to give light novels a try (also from a recent Rightstuf sale).  Yes, they are English translated.  This is why my Japanese skills never progress ;_;  I should have gotten them in original Japanese but reading each probably would have taken me a month…  So, I took the lazy route and got the English published versions by Yenpress. 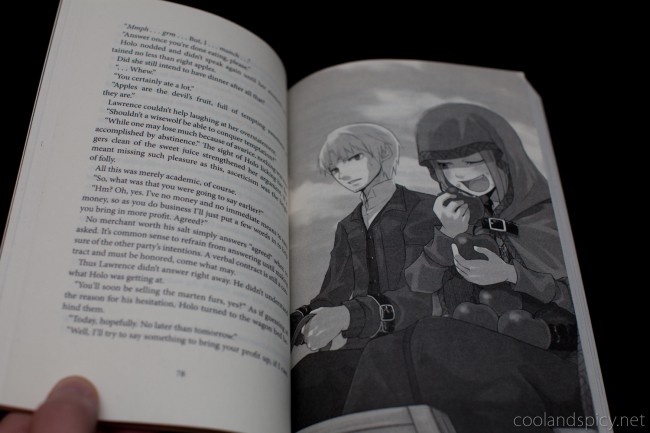 Each book has a few illustrations. Make no mistake though, the book is 98% text ^^;

Spice and Wolf light novel volume one was released just last month and caused quite a stir when Yenpress announced their “updated” cover art.  Not many fans liked the new cover and after lots of complaining Yenpress decided to provide the original cover to customers who order from certain online retailers.  Rightstuf was one such retailer that offered the original cover slip so I got it ^^.  ‘Tis a good thing since I didn’t much like the other cover.  Anyway, the novel itself…  wasn’t really a big Spicy Wolf fan but since reading thing book, I have renewed interest in the series.  In fact, I really liked the novel!  Seeing the much more fleshed out relationship between Holo and Lawrence kept my interest and left me wanting more.  I love their subtle, yet playful jabs at each other as their relationship developed.  Also, while the anime glossed over a lot of things, the novel takes its time to explain the economics in thorough detail.  It’s an all around good read. 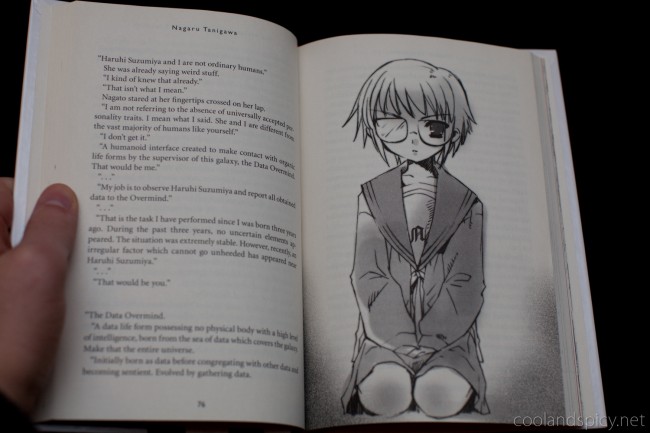 No need to introduce the next two books.  Haruhi novels volumes 1 and 2.  Still never finished the anime, lost interest halfway through.  The books, however, I can safely say kept my interest ^^.  Already read volume 1 and nearly finished with volume 2.  Kyon didn’t strike me as very clever in the anime, but I really like his character in the novels.  Haruhi, on the other hand, seems a bit more annoying here than in the anime.  Kyon is really the main character of these books though, not Haruhi.

Both Spice and Wolf and the Haruhi books were great.  Definitely has kindled an interest in light novels for me.  Would recommend both if you like reading ^^.

Speaking of kindling… here is my final item in January! 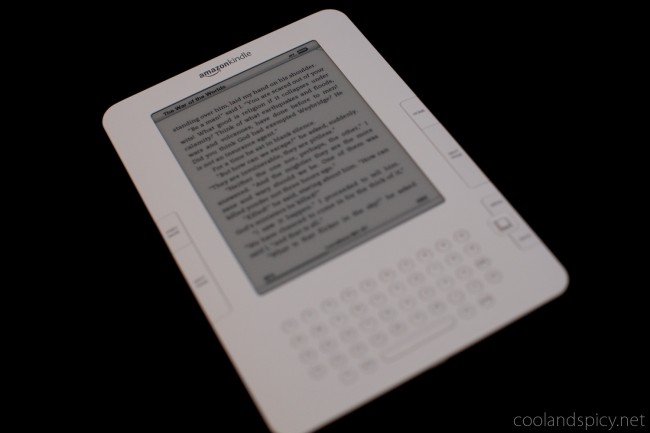 Recently became an owner of the Amazon Kindle e-reader ^^.  Was not a personal purchase however; a gift instead.  Still, I’ve always liked reading and getting my hands on a new piece of tech is always fun.  Most people have probably heard of the Kindle.  It is Amazon’s attempt to head off the inevitable drop in physical book sales and get a head start in the growing e-book market.  Prior to receiving this gift, I had little interest in e-books.  I always thought that a physical book would be more convenient and comfortable to read and to a certain degree, I still think this way.  Still, having had the Kindle for a few weeks, I have to admit I’m enjoying it more than I expected. 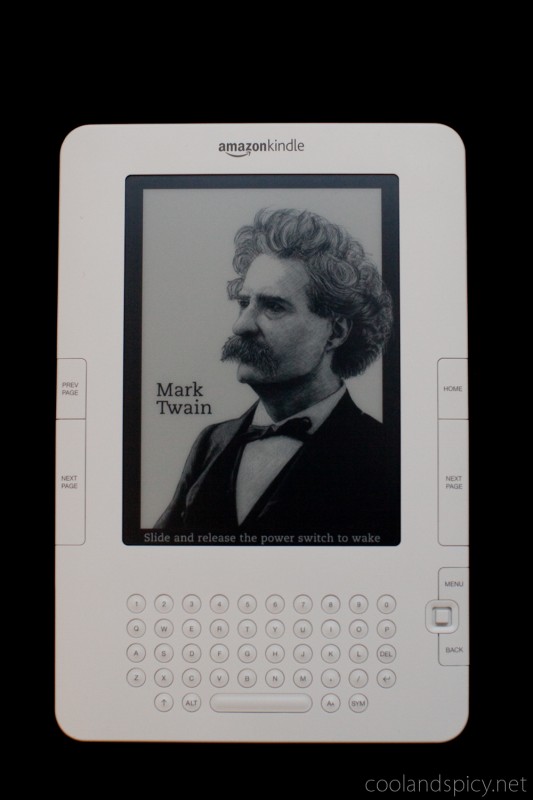 When you put the Kindle in stand-by, it displays a random greeting image.

The device is really thin and light which gives it a great deal of portability.  Also, the battery life is outstanding.  I was able to read nearly two full books before having to recharge it.  That’s about 2 weeks time.  It has built-in (and free) 3G connectivity which allows you download books instantly and even browse the web if you like (the browser is pretty bad though).  Most importantly, though, is the screen.  The Kindle uses e-ink technology which gives displayed text a very natural, paper-like appearance on the device.  I don’t know about you, but when I stare at an LCD screen, even nice ones, I can tell it’s a screen and reading for hours on end will result in some eye-strain.  The e-ink tech in the Kindle pretty much dismisses the eye-strain problem.  It’s very easy to look at and read.  The downside is that the screen is slow to refresh and is only black and white.  Still, that’s completely acceptable for normal book reading so I’m not bothered by it.  As for the books, I don’t like the DRM’ed mess that currently exists but since many classic, public domains books are available for free on Amazon, I can’t fault them much there.  Currently reading War of the Worlds and have a dozen more on the device waiting to be read ^^.

Anyway, this post has gotten too long so I will end it here.  I actually have received most of my C77 goodies as well but I will save those for a later post.  Thanks for stopping by!