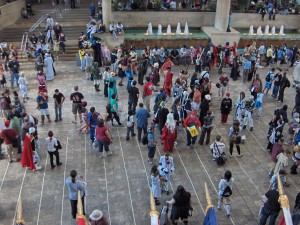 I just returned from Otakon 2008 in Baltimore, Maryland over the weekend. It was a good showing this year, with a record number of 26,000+ attendees at the Baltimore Convention Center. Considering I live in Indiana, it was quite a drive to Maryland. Luckily, I know some old college pals who live in the Baltimore area and we were able to stay at their house. In fact, the purpose of the trip was as much to see old friends as it was to go to the convention ^^;

The drive was pretty rough. It takes about 10 hours to drive to Maryland from Indiana and since there were only two of us, it was 5 hours of driving for each of us. Thankfully, during my off time, I got a little IRC chatting done on the drive there thanks to EVDO and tethering :D 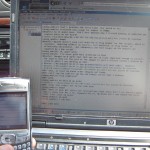 Also, there was some nice scenery on the road to to Maryland. West Virginia has some nice mountainous views. 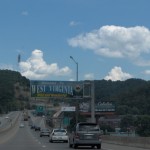 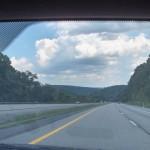 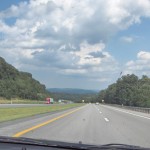 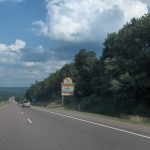 As for the convention itself, it seemed it bit less organized this year. Not that getting 26,000 people together for 3 days can ever be called organized, but it seemed more chaotic this year. For example, when we arrived Friday morning to get our badges (we had pre-registered), there was already a long line formed just to get a badge. This line stretched out of the building, around the corner, and all the way to the end of the convention center. Of course, there was an even longer line for the unfortunate attendees that didn’t pre-register >_<

When I went to Acen earlier this year, they had the extremely useful option of having your pre-registration badge mailed to you (for a mere $1.50 extra) a couple weeks before the event. When we arrived, we just put our badges on and walked in the door. No line, no waiting at all! Otakon should try this…

Also, it seemed there were fewer panels this year. Well, there were 4 panel rooms in use most of the time, but there weren’t many panels that interesting to me (or anyone else in my group). We spent most of our time trolling the dealers and art rooms, watching some of the newer anime releases, and attended a select few panels. I was able to watch 5 Centimenters Per Second for the first time. I liked it :) I didn’t personally go, but the Death Note LA movie was also popular. Snapping pictures of the cuter cosplayers was, of course, on the agenda as well ^^;

As for the loot I picked up this year, it was a bit less than I spent at Acen. I decided that instead of actually purchasing items at conventions, I should use them to instead decide what I want to purchase later on the Internet (at lower prices). I still picked up some goodies though ^^

I grabbed the Pita-Ten art collection by Koge Donbo (love her work). 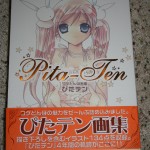 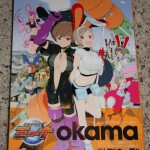 I also grabbed the August issue of Megami Creators ^^ 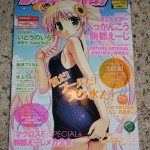 Aside from the art book type items, I came across some cute Lucky Star gashapon figures. I grabbed a set of them but I really prefer the Kagami (heehee). 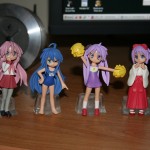 Also, speaking of Lucky Star, in the Artist Alley I found a pair of very cute posters of the 4 main Lucky Star characters. The artist, Elise Trinh, has a nice style with her paintings and drawings. I decided to support her work and bought the two Lucky Star posters. 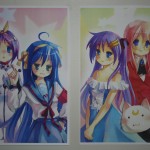 And lastly, I also snagged the first 6 volumes of the Berserk manga. I’ve already read scanlations past that point but it’s a good series (if you can take the violence & gore) and worth buying! 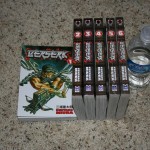 We decided to not attend the Sunday events and instead left for home early. Considering the length of the drive, it was probably a good idea >_< I think next year I will only go to Acen or Otakon, but not both. It's too much time, money, and effort to go to these conventions... Who knows, I am considering an overseas trip next year so I may not go to any cons at all. Maybe more on this later. Some cosplay/misc images: [gallery=4]