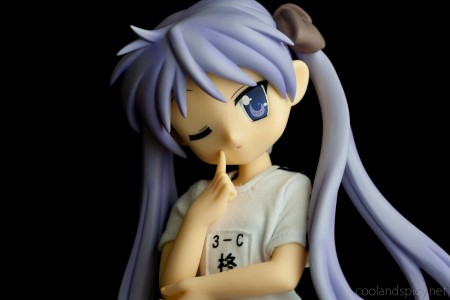 Lucky Star and FREEing strike back with the recent release of Hiiragi Kagami in 1/4 scale.  This is a follow-up to last month’s “Super” Konata, a figure of epic proportions (literally).  Luckily, “Super” Kagami does not disappoint ^^. 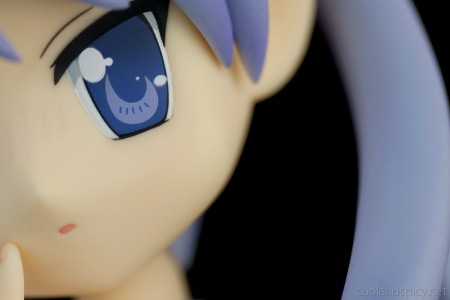 I’m glad to finally have the lovely Kagami in my hands and I have to say, she looks much better in person ^^.  There were many fans that were critical of the pose and look FREEing chose for this figure and I admit I was skeptical as well.  However, having had a chance to inspect her thoroughly, I can say that I don’t mind the pose at all.  In fact, I’ve grown rather fond of it ^^. 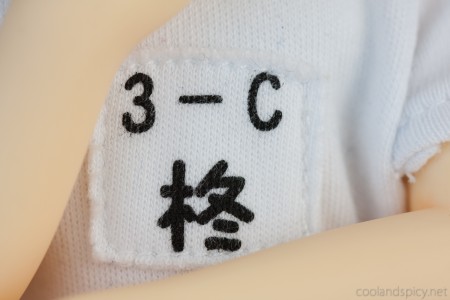 Poor Kagami has never been able to get into Konata, Tsukasa, and Miyuki’s class.  While they’re all having fun in 3-B, Kagami is stuck in 3-C with “Va!” girl Misao and some other misfits.  Of course, I still love Misao and the other 3-C girls ^^; 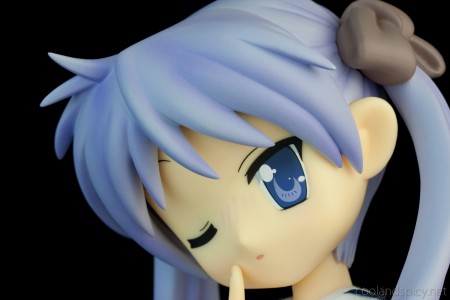 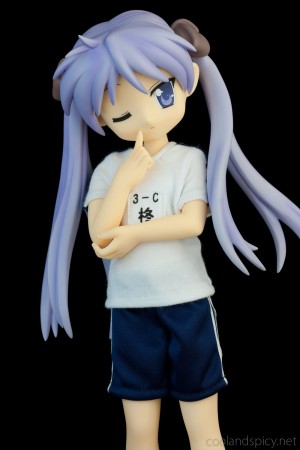 Kagami’s pose is quite fitting for her personality.  It really exemplifies her tsundere tendencies.  She is deep in thought but has the slightest blush visible as if she’s thinking something embarrassing but won’t admit it to Konata ^^; 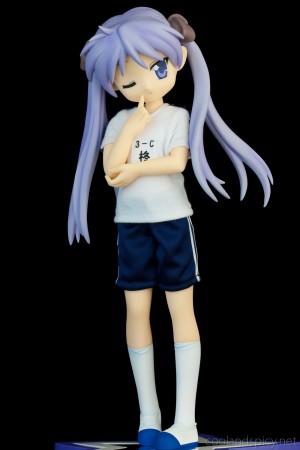 I like the way she is standing with her feet pointing somewhat together and one foot slightly raised.  Gives an extra cute appeal to her pose :) 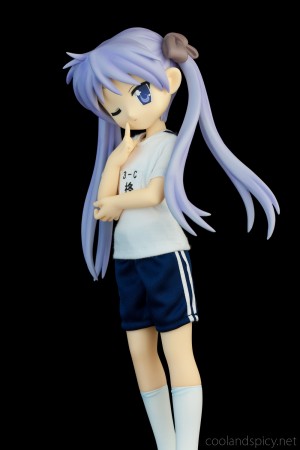 Like Konata before her, Kagami comes dressed in her school gym uniform which is real fabric and very well made.  And while I’m satisfied with the default clothes, I was quite pleased to learn that FREEing will be releasing additional clothing outfits for their 1/4 scale Lucky Star set.  Can’t wait for more info on them ^^ 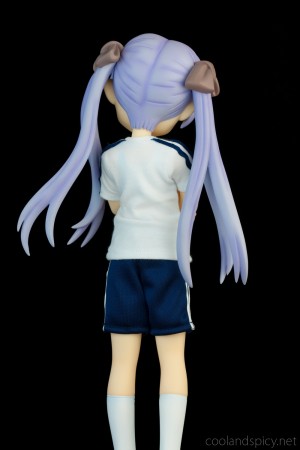 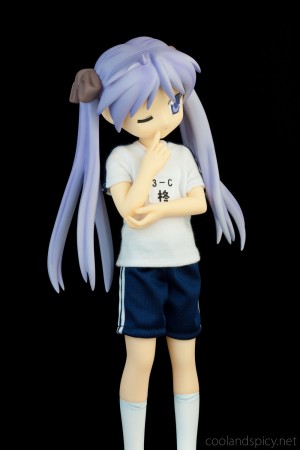 I think the wink is what discouraged many people about this figure.  While I’m not sure it was the best choice I can’t say it bothers me.  It does contribute to the deredere side of Kagami. 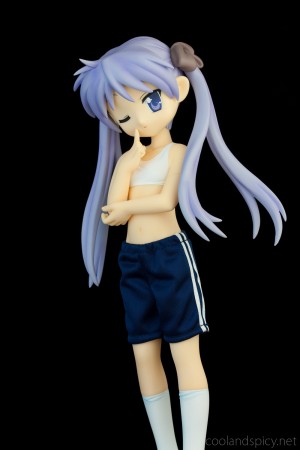 Kagami’s gym uniform is removable like Konata’s.  This is a required feature for the swappable clothes but I think it’s also a little bonus for the fanboys ^^; 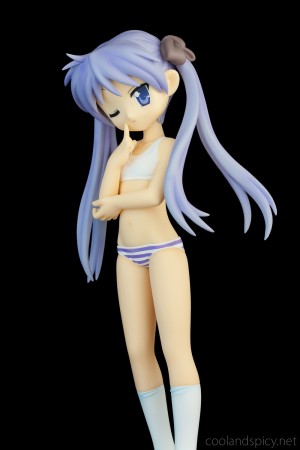 Kagami is designed a bit different than Konata in how the clothes are swapped.  Due to Konata’s wide leg stance, both of her legs must be removable to slip the gym shorts off.  Kagami on the other hand, has a narrow stance which means neither of her legs need to be removable.  However, due to Kagami’s folded arms, both of are removable so the shirt can be taken off (only one of Konata’s arms is removable). 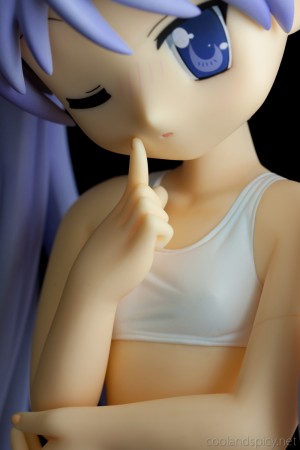 Also unlike Konata, Kagami does not quite resemble a board and has a little something to be proud of ^^;

What’s this, more shimapan? ^^;  Seems Kagami is also a fan of stripes.  I should also point out the color-coordination with hair color (same with Konata).  A trend to continue with the next two figures, perhaps? 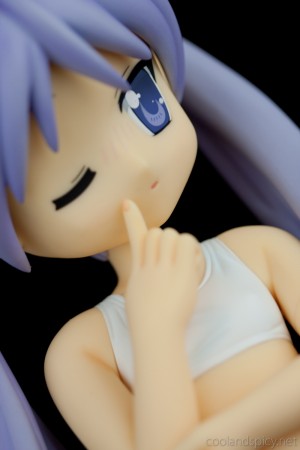 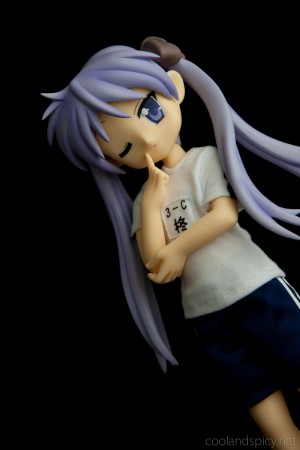 Tried a single light source to add some shadows.  Didn’t turn out bad but I think I could do better with more focused, direct light.  Will have to play more with the idea. 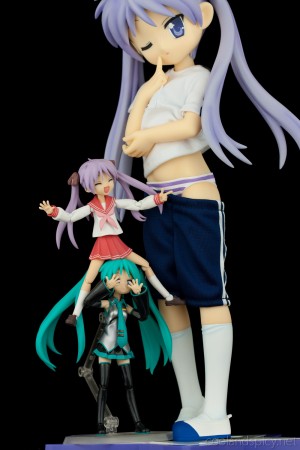 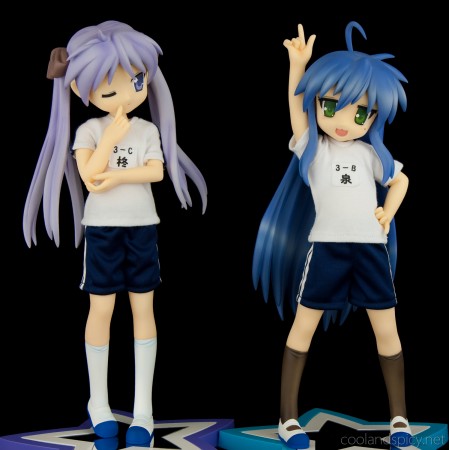 A great figure overall.  I’m glad to see Super Kagami is indeed taller than Super Konata.  I was afraid they really wouldn’t be proper scale.  And the pose didn’t turn out as bad as I initially thought.  Quite nice actually :D  I am now quite convinced on obtaining the last two figures in the set, Tsukasa and Miyuki.

Unfortunately, Kagami is not in stock at Hobby Search and HLJ, my main two shops, but may still be found elsewhere.  It looks like both Konata and Kagami are going out of stock at a lot of stores so if you’re still thinking getting them, sooner would probably be better than later.  Tsukasa is due out later this month so it’s too late to pre-order but should be in stock for at least a few days.  Look forward to her review ^^.