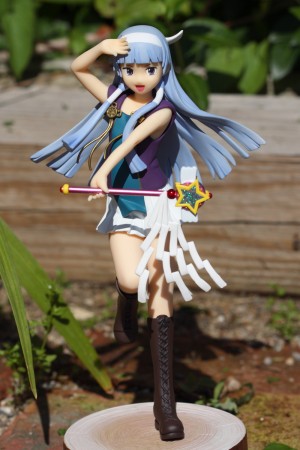 After watching the Kannagi anime and thoroughly enjoying it, I found myself looking for more of the lovely Nagi-sama.  I discovered that there were already a few Nagi figures out and about.  Wave, Kotobukiya, and FREEing all had their own Nagi figures available and an additional Clayz version is out later this month.  Sadly, these Nagi figures all seemed to have something slightly off with them but I thought the FREEing version was the most appealing and I decided to place an order for her. 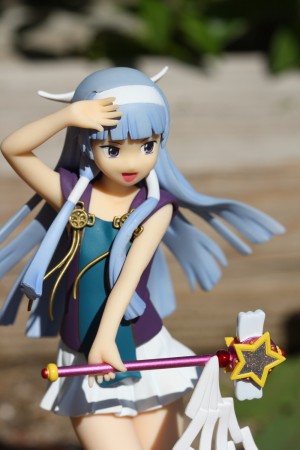 A few weeks later, I returned home to find Nagi waiting for me.  A pleasant surprise indeed :) 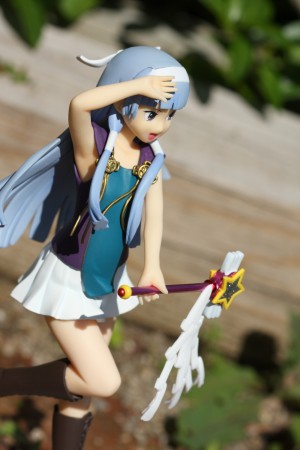 She is dressed in her regular attire that came with her when she appeared before Jin for the first time.  I wish I had my own personal earth goddess.  I wouldn’t even mind if she threw tantrums in the closet ^^; 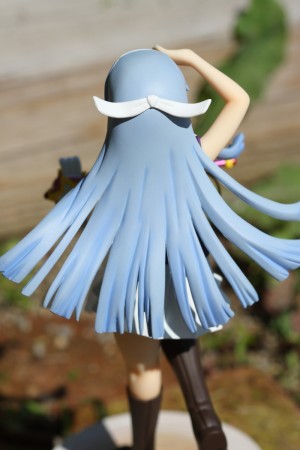 Her hair looks pretty good.  Not overly simplistic and stays fairly accurate to the source.  Her white ribbon is also in place ^^ 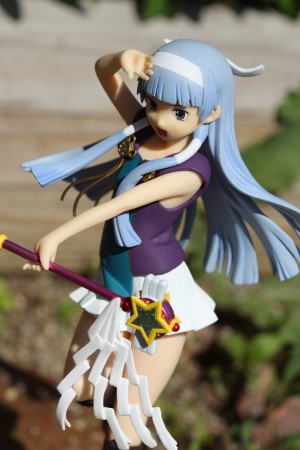 Although many fans have been disappointed with the Nagi-sama figures that are available  thus far, I think this version by FREEing is one of the better ones.  Her pose feels energetic and her outfit is well done.  I think the face is the main problem people have with this figure.  Unfortunately, it’s not perfect.  From some angles, she looks very good but from others she seems a bit awkward.  I think the above photo shows how she can look good given the right viewpoint. 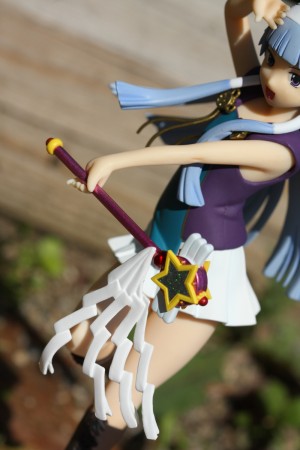 Nagi-same comes with her mahou shoujo wand to ward off any impurities for me.  Quite helpful ^^  The wand is nicely detailed with glittery reflective material. 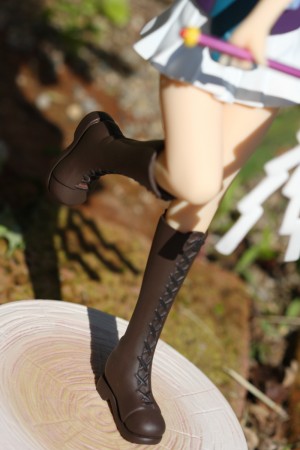 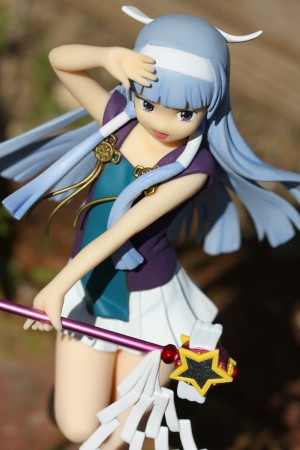 The seams on her head and hair are most noticeable.  Seems to be a common problem with a lot of figures.  Otherwise, not too bad.  There is also a scratch on the hair along the front.  I believe this is specific to my version and she came like that.  Somewhat distracting :( 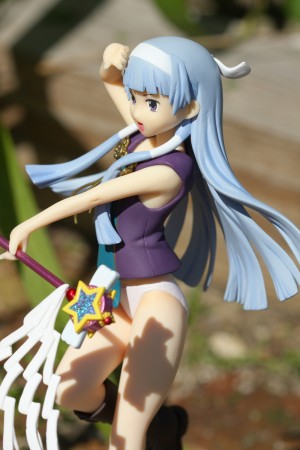 And, yes, this Nagi comes with a cast-off mode ^^; 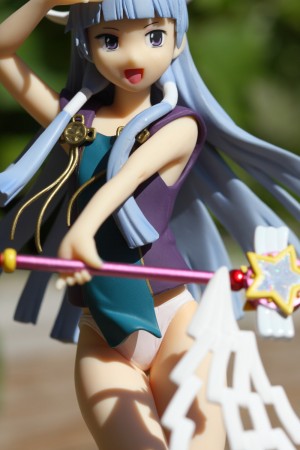 Her skirt is removable.  Gives easy access to pantsu >_<  I personally prefer my Nagis fully clothed, with their skirts on, but to each their own. 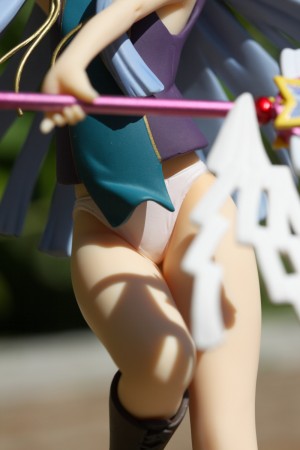 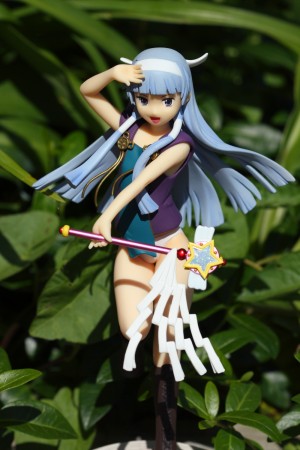 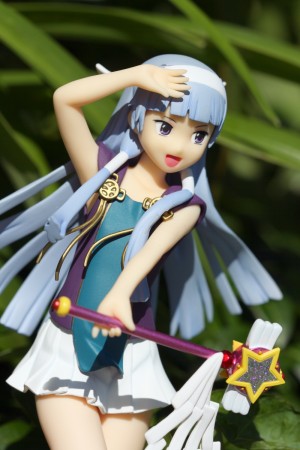 And back on goes her skirt ^^; 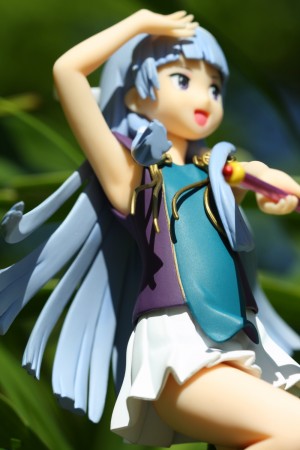 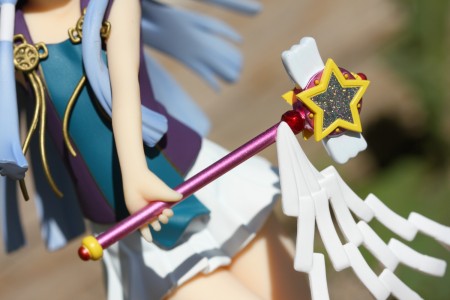 Remind anyone else of Sakura’s wand? ;) 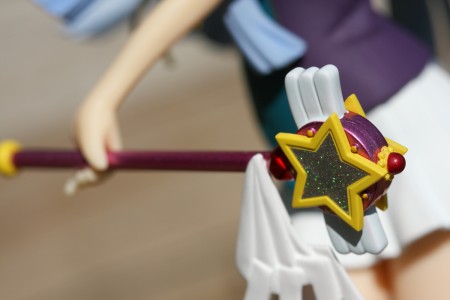 This was actually the first figure shoot I did with my Canon 100mm Macro (outdoors).  I’ve just been putting off this post for too long >_<  The 100mm macro is simply amazing for outdoors figure photography.  Allows me to get very sharp close-range shots like the one above. 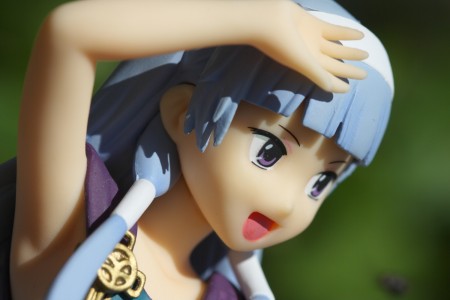 Has anyone read the Kannagi manga?  Is it good?  Better or worse than the anime? 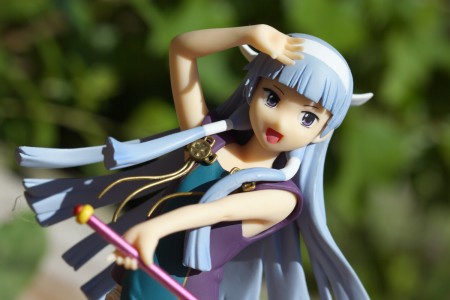 Although she’s not the best figure in my collection, I like this Nagi figure.  It’s a shame she doesn’t look good from all angles, but is still appealing overall. I am satisfied with the purchase though if she cost more than the 6,476 yen I paid, I might not have considered her.  She is still in stock at a few online shops (such as HLJ).  I would love to see more companies take an attempt at a Nagi PVC figure, maybe by GSC?  That would be awesome ^^