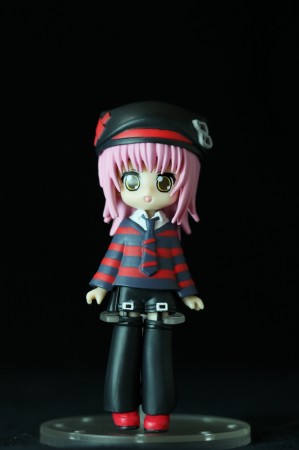 Got a big box from Anime-Export on Friday which included one of my favorite characters: Hinamori Amu!

While the Figure Decorachu Shugo Chara! figures by Yamato are more toys than most of the other figures in my collection, but they’re a lot of fun ^^;  They’re relatively small (about 9cm) and come with several accessories.  Amu comes with her school uniform and an alternate outfit with hat (seen in the series).  Amulet Heart comes with pompoms, Heart Rod, and a mini Rin and Shugo Egg. 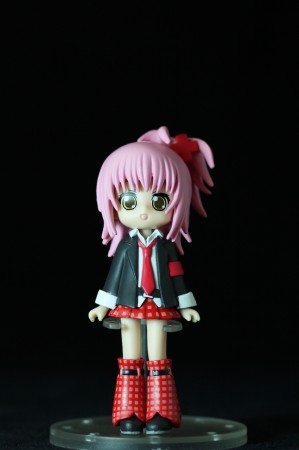 Experimenting with a black background.  I just grabbed one of my black T-shirts and taped it to the wall >_<  I set the figure as far from the wall as possible (on the table I was using) and chose a wide f/2.8  aperture.  It actually worked pretty well for the background but near the base of the figure, it was in focus and reflecting enough to make it look bad.  I think I need a better material.  Anyone have suggestions for what to use?  Read velvet works but I don’t have any black velvet ^^; 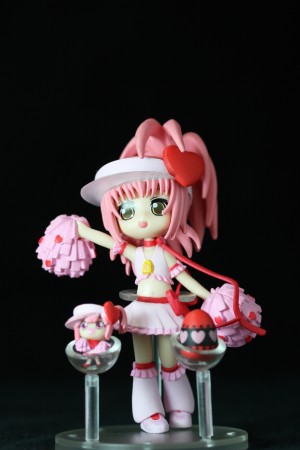 OK, so maybe these figures are more aimed at kids, but coming across good Shugo Chara! merchendise isn’t easy ^^;  They’re small and cute and were only 1,500 yen each so I can’t complain. 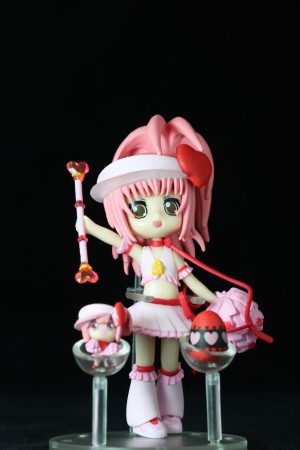 I think these will be going on my desk along along with my favorite Nendoroid figures ^^  Yamato also released an Ikuto and an Utau figure in the same line but I decided to just get Amu[let Heart]. 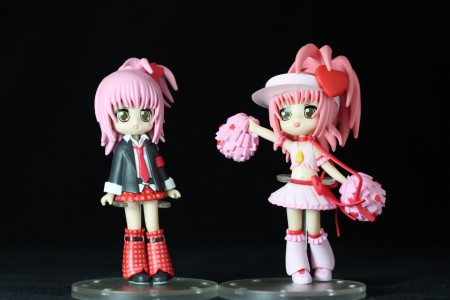 Amu and Amulet Heart at the same time. How is this possible!?

Looking at these photos makes me realize that lighting is my primary problem with doing indoor figure photos.  Even with 3 light sources, a homemade light diffuser, and a reflector, the images come out looking bad.  Plus, I still have to shoot with wide apertures and relatively slow shutters which makes getting sharp, in focus images images difficult :(.  Then again, I tend to shoot handheld since I don’t like my tripod much… What I really need is an awesome light setup like Melonpan’s.

If you’re a Shugo Chara! fan, you can find these figures in stock at HLJ and Anime-Export ^^.

9 thoughts on “A little Hinamori Amu”