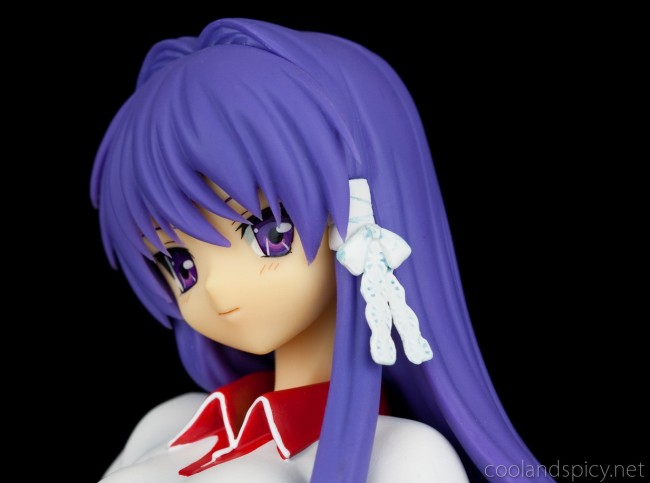 Seeing as how I’m about half a dozen figures behind in reviews, I decided it was time to stop being lazy and post pretty pictures.  This time ’round it’s Fijibayashi Kyou from the popular visual novel and hit anime series Clannad.  Did anyone else watch it? ;)  Kyou is one of my all time favorite characters so I couldn’t help but to pick her up last August. 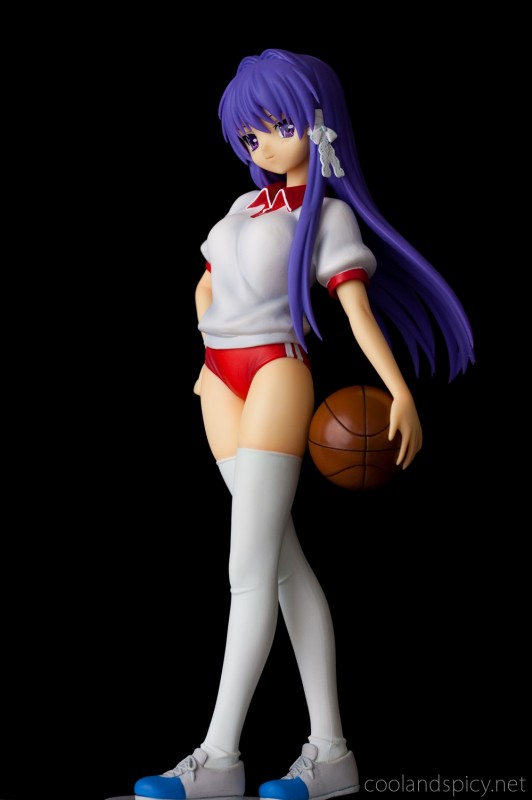 WAVE has rendered Kyou in the school gym uniform she uses during her basketball activities.  The key parts of the outfit are, of course, the distinctive red bloomers and white thigh highs.  Sure, it’s a completely unrealistic outfit for an actual high school student to be wearing, but that’s what makes it fun xD  This is the outfit Kyou wore during the infamous ‘locked in storage shed’ scene.  You remember that, right?  Here’s a reminder, just in case ^^ 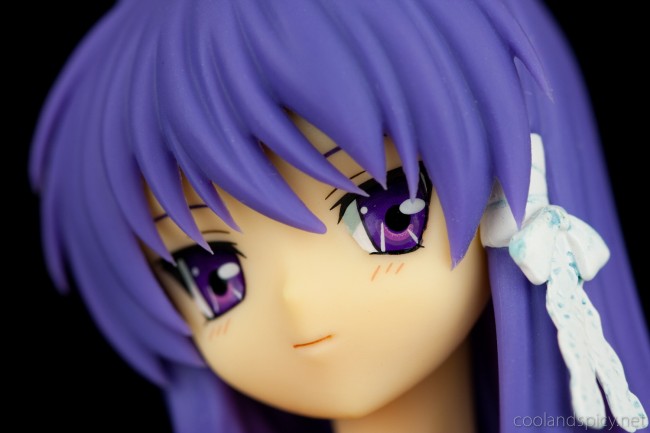 At 1/7 scale, this Kyou figure is slightly larger the 1/8 scale that most figures come, but the size difference is barely noticeable and I would probably easily mistake it for 1/8 if I didn’t know the actual scale. 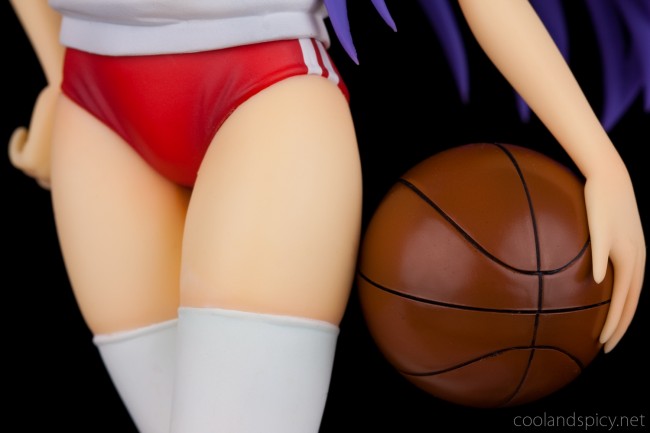 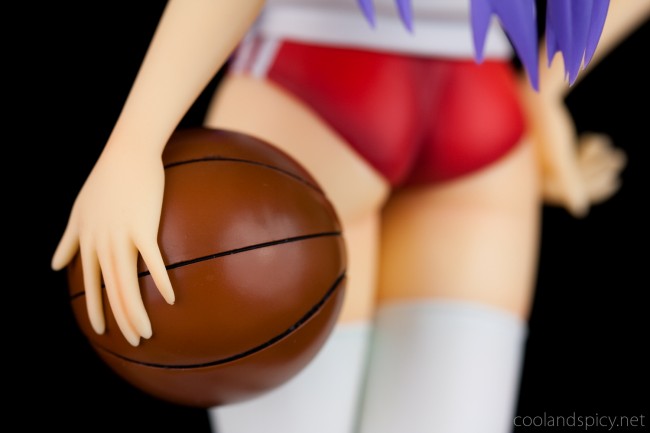 Kyou carries the basketball from practice.  It’s perhaps a bit too shiny/smooth.  Anyway, do you like this photo? 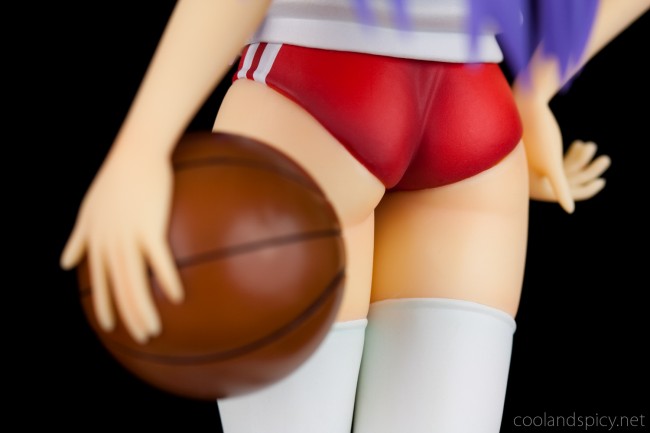 Or do you prefer this one? xD 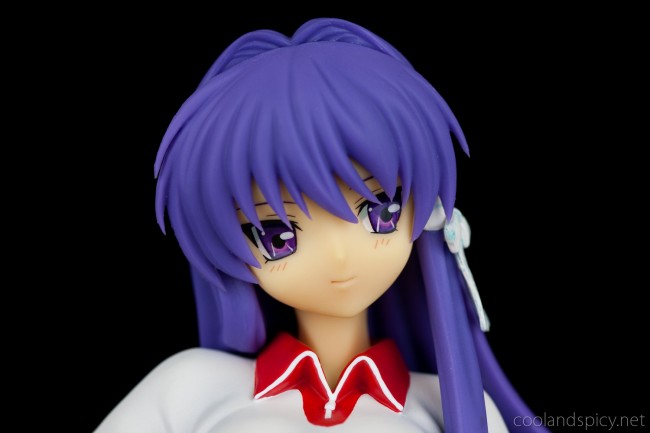 One of my main gripes with this figure is Kyou’s hair.  It’s a bit clumpy and simplistic but beyond that it had rough molding.  Some of the edges and corners weren’t cleanly cut and had small fragments loose.  From normal viewing distance, this is not really apparent but with these macro shots, it can be seen (in this photo in particular). 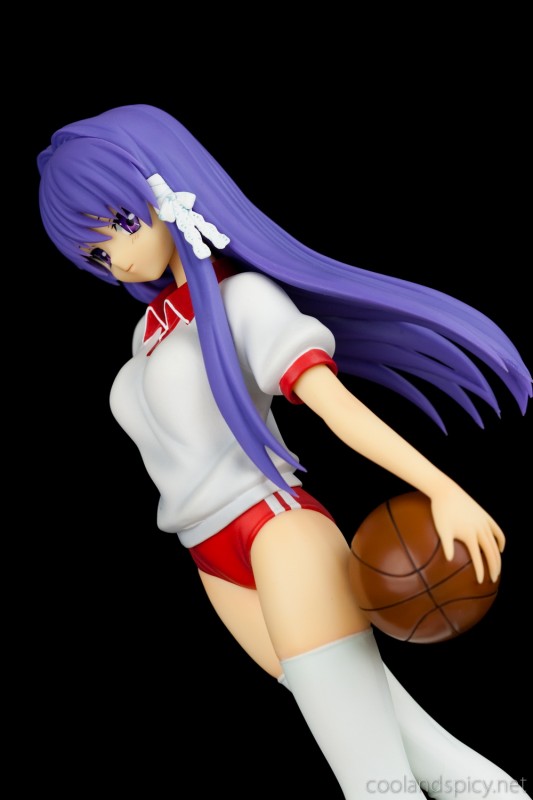 I do like the figure’s pose.  Kyou is in her gym uniform, basketball in hand, seemingly in the middle of practice.  It’s quite fitting that she has a look of confidence on her face and her pose is with her in a self-assured mid-step forward.  Seems like an accurate reflection of her strong-willed, athletic personality. 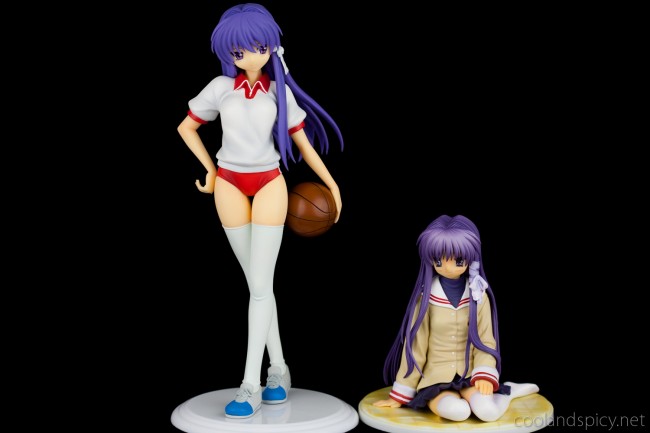 As a final parting shot, I’ve included Wave’s 1/7 scale Kyou beside Kotobukiya’s 1/8 scale Kyou from 2005.  That Kyou was one of my very first  figures and is still one of my favorites.  She is very well made, especially her hair ^^.  I wish I had the other Clannad figures from Kotobukiya’s set >_<

Anyway, this review is about Wave’s Kyou, not Kotobukiya’s ^^;  Wave’s Kyou was released back in August 2009 and retailed for about 7000￥.  Upon writing this post, I discovered that Wave is re-releasing Kyou in May 2010 ^^.  Unfortunately, it looks like pre-orders are already closed at Hobby Search and Amiami but she might still be up for order elsewhere.  So, my verdict on the figure?  The hair problems and an imperfect paint job keep me from recommending it highly, but for any Kyou fan (or even Clannad in general), I would say yes as it is the best Kyou figure since Kotobukiya’s 2005 version (released before the anime aired).  Personally, I am a satisfied owner :D

Another review for Kyou over at Tentacle Armada.