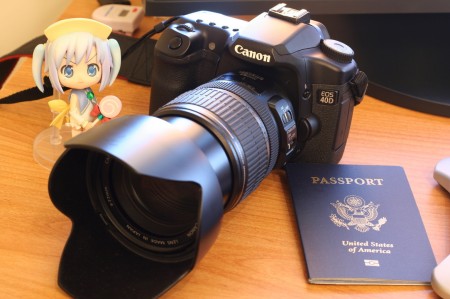 After researching the various Canon zoom lens, I decided upon this model.  I was considering some of the L series zoom lens like the 24-105 f/4 and the 24-70 f/2.8 but decided the 17-55mm was the best lens for me.  It has the wide 2.8 aperture which I definitely wanted and it has Canon’s modern Image Stabilization technology.  The 24-70 has the wide aperture but no IS for slow shutter speed while shooting hand held.  The 24-105 has IS but the f/4 aperture was too narrow for me.  So, it was the 17-55mm :)

A Kagamin to show scale.

Though it is not a L series lens, the 17-55mm has received much praise for its image quality.  It’s exceptionally sharp and the focal range is great for general purpose use.  Several of the shots, like this one, from my recent Sanzen’in Nagi shoot were done with my 17-55.  The relatively wide aperture (for a zoom) is great for portraits and produces smooth, beautiful background blurring.  Of course, it’s also useful in low light situations without a tripod.

If you didn’t notice, there’s a passport in the intro image.  I’m going on a 2 week trip to Italy this summer to visit family living there and to just have fun.  It will be my first time leaving the US, so I had to get a passport.  The process was actually much easier than I expected and pretty quick (had my passport in hand only 2 weeks after registering).  So, that’s one of the main reasons I bought my new camera lens.  I want to be able to take lots of pictures while on vacation ^^  Only 2 more months until we leave!