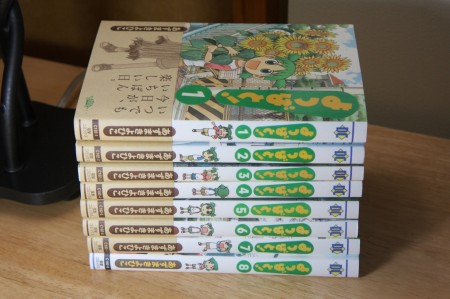 Tacked on some manga to a recent artbook order from BK1.  The manga is Yotsuba &! (よつばと！) by Azuma Kiyohiko (あずまきよひこ).  Azuma is also the creator of the very popular Azumanga Daioh series.

I use to think Azuma was female due to the -ko part of his name, Kiyohiko.  Many girls in Japan have a “ko” (girl, child) suffix appended to their name to make them sound more feminine.  Yumiko, Taeko, Hanako, etc are examples of girl names with a “ko” ending.  Anyway, Azuma is definitely a guy.  He used to draw H stuff when he was starting out with his manga work ^^;  The “hiko” part of his name is actually masculine meaning “boy”.  Picking apart Japanese names is pretty fun when you know the meaning behind the words :)

Yotsuba is an adopted five year old girl who lives with her father in Japan.  The story centers around the energetic, playful, and just plain weird little girl.  Yotsuba and her father have just moved to a new house and meet their new neighbors, the Ayase family.  There are three sisters in the Ayase household: Ena, the youngest, is a inquisitive nine year old who cares about the environment and global warming.  At nine years old!  Fuka, a 16 year old high school student, is the responsible child.  She often goes shopping for her home, likes eccentric T-shirts, and makes bad jokes.  Asagi is the oldest daughter and a university student.  She likes to play jokes on the rest of her family but is quite caring towards Yotsuba.

I picked a few pages that I liked for examples :D 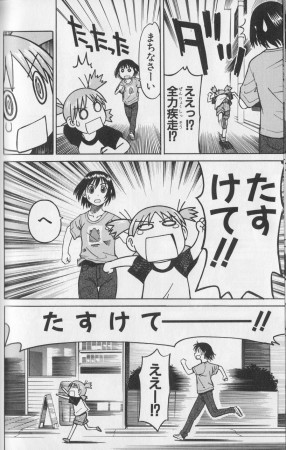 Unlike Azumanga Daioh’s 4koma style, Yotsuba&! uses a full-page format for more storytelling depth.  Each chapter is based on one of Yotsuba’s adventures such going fishing, catching cicadas, and going to the pool.  The Ayase girls generally appear in each chapter to join in Yotsuba’s adventure. 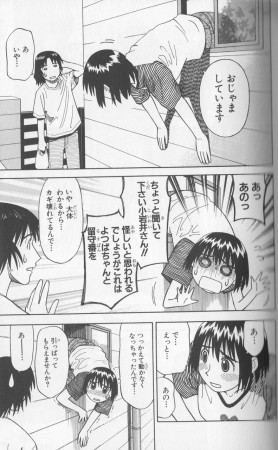 Fuka: Please excuse me for entering…
Koiwai: Oh, it’s ok…
Fuka: Ah, um, please let me explain, Koiwai-san! I know it looks suspiscious, but I was just watching Yotsuba and…
Koiwai: No, it’s alright.  I know the lock is broken.
Fuka: Uh, so, um… I got stuck, could you pull me out?
Koiwai: Ah… 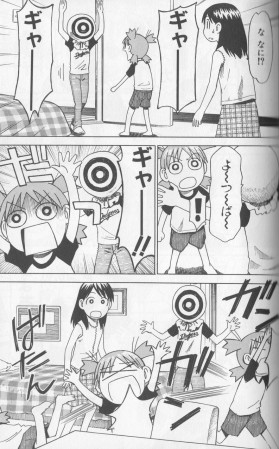 Miura plays a prank on Yotsuba

I had previously purchased Yotsuba&! volume 1-3 in English from ADV.  However, since ADV called it quits in the manga, I decided to go for the original Japanese editions.  It’s good practice for me to read it in Japanese anyway.  My kanji skills are rather rusty though >_<  For the most part, the Japanese used is pretty straight forward.  I’ve read through volumes 1-4 so far. 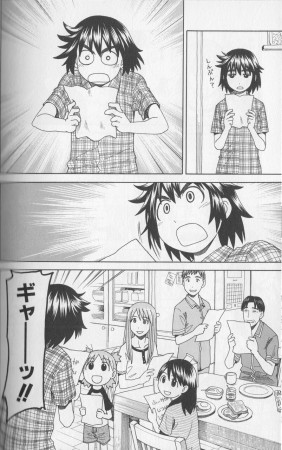 Yotsuba&! is Azuma’s most recent manga and is still in progress.  I read that Azuma is taking break on working on Yotsuba&! to do other things (Like some more Azumanga Daioh).  And if you’re looking for aforementioned more Azumanga Daioh, Azuma is drawing a few new pages for the re-release of the manga in Japan.  Scans of the new pages can already be found around the web, including translations.

Anyway, if you’re looking for a funny, ridiculously entertaining manga, you should check out this series.  If you can’t read Japanese, you can pick up volumes 1-5 in English from ADV.  I’ve read that Yen Press is going to be publishing volume 6 and beyond but are not out yet.  Either way, you should check Yotsuba out.  I highly recommend it :)

7 thoughts on “Some new manga, Yotsuba!”