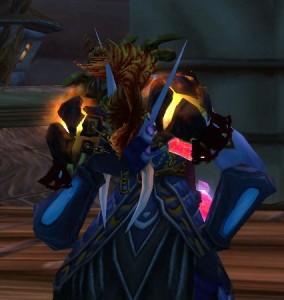 Some of you may not know, but I’m a WoW player. Yes… I’m one of them…
OK, I’m not really addicted, but I do put a lot of time into WoW but the time of epic raids and dungeon exploring is about to come to an end. I’ve decided to quit (again). /cry

No, really… I’m not addicted… I’m not T_T
All I have to do is follow these 12 easy steps and I’ll be clean in no time.

In all seriousness, while WoW can be fun to play, I just don’t have the time for it any more. Since my first character was level 20, I decided my ultimate goal was to do end-game raiding. Well, I’ve mostly accomplished that, but it’s such a massive time sink. Raiding for 4+ hours each weekday night is just crazy. I use to play on weekends as well, but I stopped that a while ago.

Sure, it’s fun being in the top raiding guild, being the first to down bosses on the server, and getting those l33t purple pixels. Working out strats for new bosses, banging your head on the wall for days trying to get that first kill, yelling at people who stood in the volcanos and didn’t move with Fatal Attraction, and then cheering when you and 24 other people finally get the kill is great. But I think it’s time to move on ;) I always liked being unique when it came to my WoW character. Instead of a traditional DPS class, I played an Elemental Shaman (no resto bolts for me) and threw lightning at my foes. Instead of the normal Tauren shaman (with Warstop), I played a Troll. Hadouken!

I think I’ve gotten what I wanted out of the game. I leveled to 60, did my quests like a good n00bie, raided some pre-BC content before the expansion, leveled to 70, ran Kara way too many times, and finally did some high-end raiding. Made some friends along the way, and got a few other people to start playing (oh noes). And, of course, wasted too many hours to count XD Besides, I’ve got a new, more casual MMO game to play now

Now I just have to tell my guild they are losing their only raiding Elemental Shaman… :-/

3 thoughts on “The End of the World (of Warcraft)”